Santia Bradshaw, CEO of Pyramid Entertainment Barbados, said her company only received US$15,000 for the video.

Beache, responding to questions from Opposition Leader Arnhim Eustace about monies reportedly paid in January 2010 to a company responsible for the marketing of regional artistes, said the cost was disclosed at the launch of the initiative.

The former tourism minister said the video was sponsored as a push for carnival and to enhance the marketing of St. Vincent and the Grenadines destination with the assistance of a local artist, since “Beast Let Go” had gained immense popularity in the region.

“Really, it is the same approach used by Jamaica with the music of Bob Marley and more recently by Barbados through the use of the music of Rhianna,” Beache said.

Eustace, noting that the monies were paid about six weeks after the Constitution Referendum of December 2009, had said that he wanted to know whether the EC$75,000 was in fact paid, what it was for, and who received it.

However, Santia Bradshaw, CEO of Pyramid Entertainment Barbados, the firm that produced the video, said in a press statement on Wednesday that the Tourism Authority gave her company US$15,000 to produce the video.

She said that in November 2009, initial discussions began between Pyramid Entertainment and the Ministry of Tourism on behalf of Skinny Fabulous, seeking financial assistance for the production costs associated with a music video.

A proposal was submitted in December 2009 and after several discussions between the respective parties, the Tourism Authority granted the sum of US$15,000, the press statement said.

“This was the first and only grant ever received from a government agency on behalf of Skinny for any music related project,” the press statement said.

A company was employed in Jamaica to shoot the video in Jamaica. The video was submitted to the Tourism Authority and the grant was paid on Jan. 5, 2010. 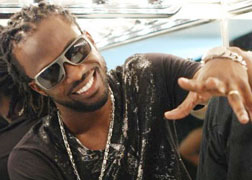 A press conference was subsequently held in St. Vincent to launch the video, which was received with great fanfare, the statement further explained.

Bradshaw said that because the video was filmed in Jamaica, the its was less than other comparable videos that her company has produced for other artistes.

She said that internationally acclaimed music video director Jay Will and his production team, which included stylists, make up artists, talent, location scouts, a director of photography and a producer, were all accessible to her company in Jamaica.

Further, Skinny Fabulous, who was completing his studies at the Mona Campus of the University of the West Indies, was also on the island.

“The costs were therefore significantly less than if we had flown an entire crew to St. Vincent from Jamaica and covered all associated costs including fees, accommodation, flights, and per diems,” Bradshaw explained.